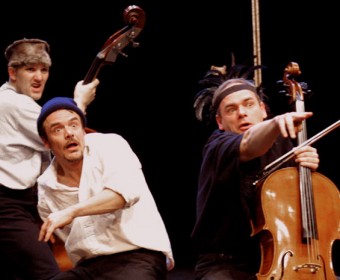 ‘Moby Dick’ is the story of Captain Ahab, who lost a leg to the notorious white whale. Driven by his thirst for vengeance Ahab chases the beast around the globe. Ruthlessly, he risks the lives of his entire crew, including innocent and trusting Ishmael, who has embarked on this, his maiden voyage to swap his landlubber’s life for many years of adventure at sea.
The audience shares Ishmael’s journey through the ‘glory days’ of whale fishing, when men still killed the giant mammals with their bare hands, risking their lives but looking forward to untold profits. The spectators are offered an insight into the period, into the dangerous work of whale fishers and daily life at sea. The play also shows the economic importance whales and their industrial processing had at the time.
Herman Melville was the son of an impoverished New York family. He spent four years working on whaling ships before writing the epic story of Captain Ahab and his nemesis, the gigantic sperm whale Moby Dick, in 1851. Although most of us are likely to share the author’s revulsion of the hunt for these gigantic and highly intelligent marine mammals, it is impossible not to be fascinated by it. At a time when it entailed rather more than today’s mechanised bloodbath – when it necessitated extreme personal courage and struggle – whale fishing could frequently become a contest between man and whale, and, as is the case with Captain Ahab and Moby Dick, a personal conflict with uncertain outcome.

Press
“We were breathless as we sat beside Ishmael on a coffin in the middle of the Pacific Ocean.“
Hamburger Abendblatt

‘Moby Dick’ is testimony that the crew of ‘Theater Triebwerk’ are masters of their trade. Devoid of silliness, the play is extremely well crafted and manages to tell a highly complex story with few, sparsely handled means. This is Triebwerk’s trademark, a reliable guarantor of excellence.“
Theater der Zeit – June 2000 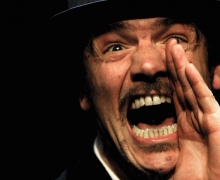 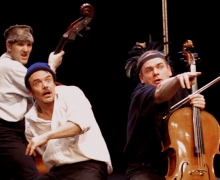 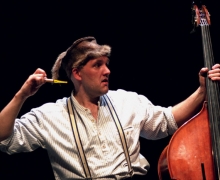 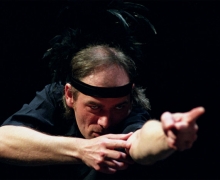 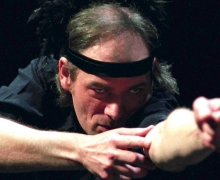