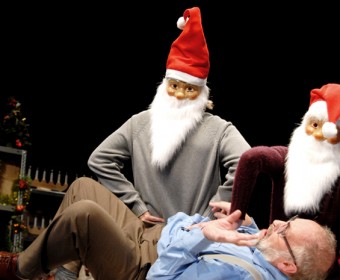 “Through people’s hearts straight into my wallet,” that is the motto of Klaus Krischeck. In his “Christmas Wonderland” he sells everything that makes the cash register ring during Christmas time: with a range from tinsel to singing Santa dolls.
On Christmas Eve of all days he has got an idea for a new product: “The Compacted Dickens”. Although it is already past closing-time he wants to force his two underpaid employees Brackmann and Thiel to immediately study and rehearse the story of the ruthless cheapskate Scrooge and his mysterious change into a generous human being. But then the characters of the old story touch the selfish and heartless profiteer Krischeck more than he would like them to.
As ghostly announced at midnight by the eerie Marley, Krischeck experiences a journey through his whole life: He is a little boy who is going for a stroll across the Christmas market with his eyes wide open, he has to observe the spooky Christmas dinner of his tormented employees, he unexpectedly runs into his long forgotten early love and finally gets a gruesome forecast of his future.
Referring to the famous story by Charles Dickens Theater Triebwerk and Jan Pusch tell the transformation of a misanthropist to a philanthropist using modern and fascinating images.

Press
“300 Children were in awe of Krischeck’s transformation at the premiere of the Christmas Carol by Charles Dickens… The production by Jan Pusch of Theater Triebwerk is refreshingly new.”
Hamburger Abendblatt – December 6th 2006 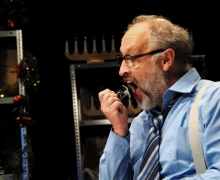 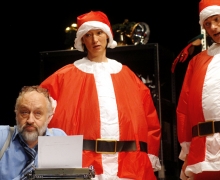 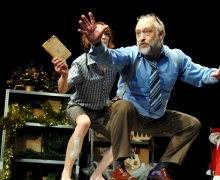 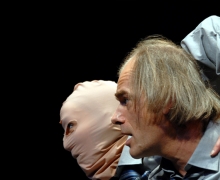 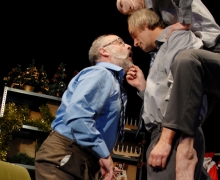 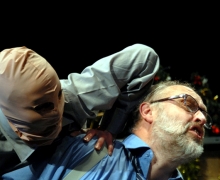 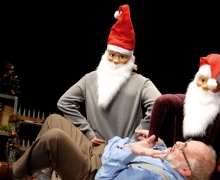 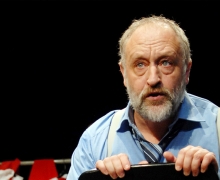