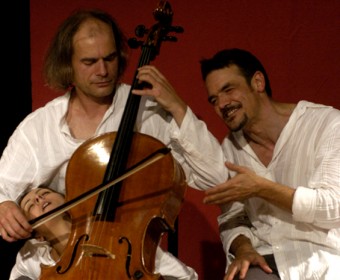 A farmer who in former times had entertained the village with his stories has become grouchy in old age and won’t let anyone share in the fruits of his talent for story telling. The stories themselves are so incensed by this that they decide to kill him by three different methods. The farmhand becomes an inadvertent witness to this conspiracy and so tries to persuade his grumpy master to tell his stories. However, he cannot tell the farmer the reason why; if the farmhand betrays the stories’ secret he will be turned into stone. ‘The farmhand achieves his goal by somewhat turbulent means; the basic theme of the three remarkable stories that unfold is the question of whether or not human beings can change their own circumstances and personal destiny.
Theater Triebwerk’s rousing production is a treasure trove of stories from the Indian sub-continent. After two successful tours of South Asia the independent theatre company from Hamburg was commissioned by the Goethe Institute in Chennai/India to develop an “Indian play” for children and adults. “A Conspiracy of Stories” provides an exhilarating view of Indian culture and attitudes, which seem unfamiliar and exotic to us, although the comic characters and their actions are instantly recognisable.
A Conspiracy of Stories’ is a hymn to the power of story telling. Without the ability to tell or hear stories and without the willingness to pass them on or listen to them, communities are doomed to fragment and become merely collections of selfish individuals. With dashing role changes, choreography and live music (saxophone and cello) two actors and one musician take their audiences on a journey into exotic worlds where fun, fascination and contemplation all have their place.

Press
“The set design and music are free of any folksiness and create a kind of ‘World Theatre’. The cello and saxophone provide atmosphere with rhythms and melodies that contain their own authentic language of imagery and only rarely resorts to quoting from India.”
taz – 8 th December 2003

“The trio develops several stories from one fairytale to create a magical play about fate and freedom, with nuances set by the cello and saxophone.”
Hamburger Abendblatt – 15 th December 2003 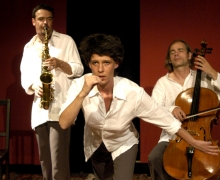 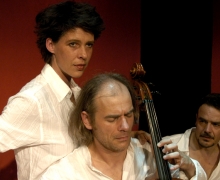 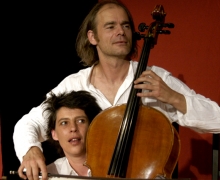 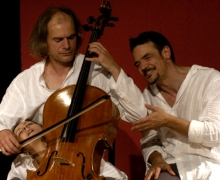 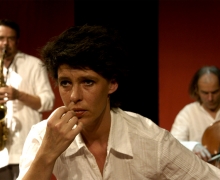