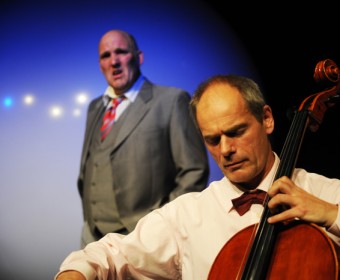 Any child can tell you that the earth is round! But how do we know? We have read about it, we have been told, we have seen it in the cinema. But no one has ever seen it with their own eyes, experienced it or tested it out. ‘The Earth is round’ is a story by Peter Bichsel about an old man who didn’t have much to do and so spent his time rethinking everything that he already knew. His doubts led him to plan a trip that would take him on a straight path around the globe.
But the simplest things are often the hardest. This is what the two performers and musicians experience themselves once they let themselves in for circumnavigating the earth in a game of make-belief. With Bichsel’s text in their pocket they set off on their journey but go astray, wind up in dead-ends and discover untrodden paths.
What do I know? What can I believe? What opportunities for experience and knowledge do I have? Which path will take me there? Or should I refrain from asking these questions and simply set off?
This voyage of exploration to the most remote corner of the human imagination is presented in a suspense-packed mixture of quizzical hesitation and departure, musical activity and verbal reflection.

Dramatisation rights for ‘Kindergeschichten‘ by Peter Bichsel held by the publishers Kiepenheuer Bühnenvertrieb. Sponsored by Stiftung Niedersachsen and the federal state of Lower Saxony. Winner of the third prize at the Hamburg Children’s Theatre Festival 2011.

Press + Testimonials
In this stage adaptation the free drama collective ‘Theater Triebwerk‘ has conjured up a small theatrical collage. Well-tempered it lingers on the threshold between the transfer of knowledge, sensual experience and narration.
It is about broadening one’s own horizon, about physical and mental flexibility and – with carefully designed video projections of silent movie clips and poetic images – about writing history. A short trip around the world in just one hour.
Hildesheimer Allgemeine Zeitung – 13 September 2010

In Theater Triebwerk’s production ‘The Earth is round’, based on a children’s story by Peter Bichsel, they demonstrate yet again what theatre can mean to children – and not only to them: aspirations, suspense, entertainment and art – educating our vision and listening, in an encounter of artists and audience. It is joyous narrative theatre that sharpens the senses, stimulates thought and at the end of the show leaves the audience with new impressions. Statement by the jury at the presentation of the Hamburg Children’s Theatre Prize – 19 June 2011 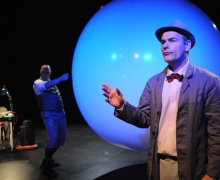 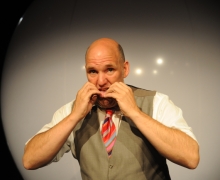 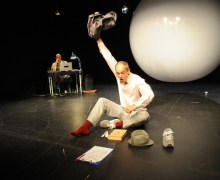 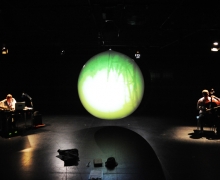 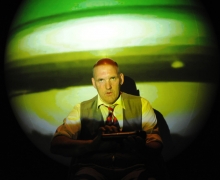 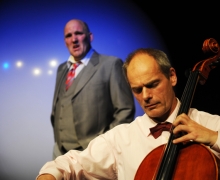 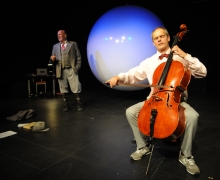